This is the first article in our five-part series introducing the new features in 12d Synergy Version 4.2. In this series you’ll learn all about these new features: what they do, how they’ll help you, as well as step-by-step guides on using them. 12d Synergy 4.2’s features include our new Image Gallery, Version Merger, File Watcher and Download Dependencies. We’re really excited to bring this to you, and we hope you enjoy the series!

You can also check out all these new features with our free on-demand webinar – What’s New in 12d Synergy 4.2  – hosted by CTO Richard Stoliar and Shane Machon – next session in 15 minutes!

The Genesis of 12d Synergy

12d Synergy was born out of the rubble of the 2011 Christchurch Earthquakes which devastated Canterbury’s infrastructure. Roads were shattered, utilities torn and bridges crippled.

To repair and rebuild, an infrastructure taskforce of unprecedented size and skill was formed: Stronger Christchurch Infrastructure Rebuild Team (SCIRT).

12d Synergy was built from SCIRT’s requirements and the problems and needs of the industry. Through eight years of continual user feedback and requests, 12d Synergy has been shaped into an enterprise data management and project collaboration system, built specifically for the needs of architectural, engineering and construction (AEC) businesses. In short, it’s all about creating an efficient, common data environment to streamline how AEC offices work and collaborate. User feedback continues to be the key driving force behind 12d Synergy’s development. As such, we’ve introduced the all-new 12d Synergy Patch Releases. These are user-driven feature requests and quality of life updates, released during major versions.

Patch Releases allow us to respond faster to your feedback, as well as bugs. They also mean you don’t have to wait for major versions every two years to get new features. We aim to release at least one Patch Release per product version!

All 12d Synergy users have free access to the Patch Releases, and they’re simple and easy to deploy – just like a bug release – so you can take advantage of the new functionality straightaway. They’re also forwards and backwards compatible with other versions of 4. For instance, 4.1 clients can communicate with a 4.2 server, and vice versa. Cool!

12d Synergy 4.2 is the first Patch Release of Version 4 and introduces a set of new features and quality of life updates requested by you. This release also includes a number of usability optimisations and performance improvements under the hood, so you can get more done with less clicks and loading.

Beyond the geospatial models, documents and emails, all AEC offices also have numerous image assets they need to manage. 12d Synergy’s new Image Gallery is a scrollable visual album making it easier and faster to view, edit and manage your images. 4.2 also comes with a new toggleable thumbnail view. Continue reading about our Image Gallery here… Version Merger allows users to quickly and simply combine duplicate versions of a file together in 12d Synergy, gathering all the files’ metadata under a single file. This ensures all your files are up-to-date and your single source of truth is maintained. Learn more about merging files with Version Merger here…

File Watcher is a dedicated folder on your local computer that automatically uploads files which are added to it into 12d Synergy. This allows you to quickly and easily upload many files from your local drive, such as when downloading files from the Internet or plotting from CAD. Learn how to configure and use File Watcher here…

12d Synergy’s Task Reports have been given a major facelift in 4.2. Task Reports are viewable from a web browser and can be customised to add your company’s branding. Our new Task Reports are also not just an image, but interactive – you can expand and hide specific sections. 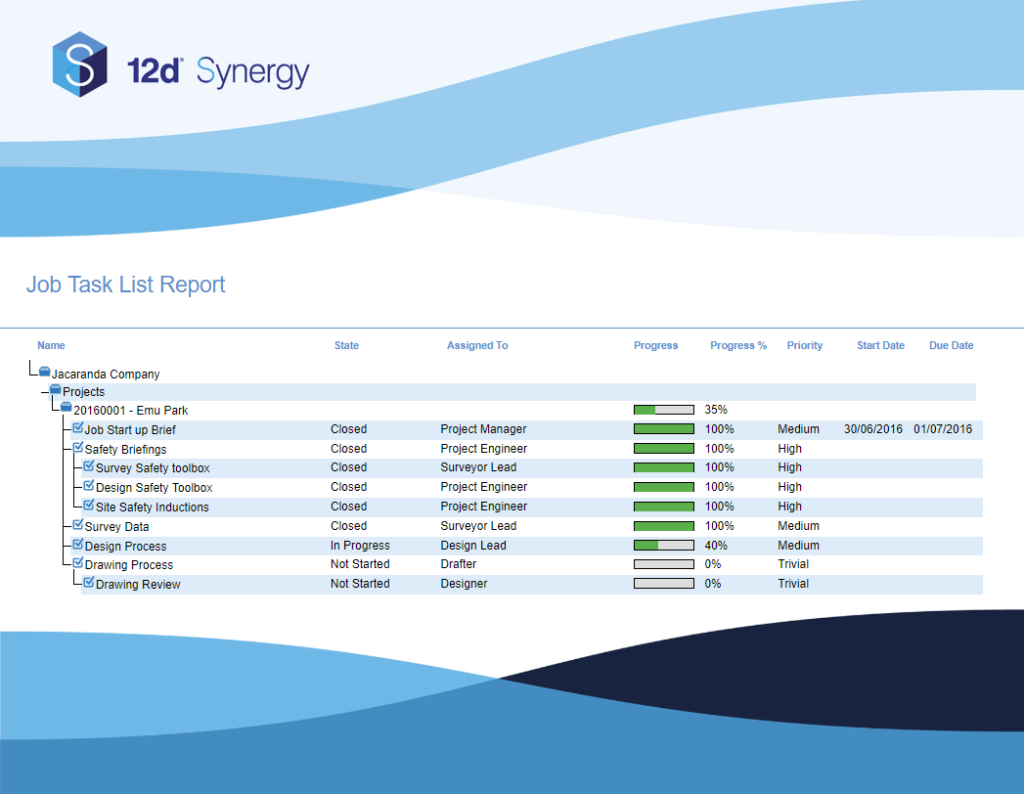 12d Synergy’s new Autotune allows system administrators to perform soft restarts of 12d Synergy from the client, rather than having to go to IT. Database tuning can now be scheduled to run automatically on a regular basis, such as every Saturday morning at 1am. Regularly running tunes is an important maintenance task for administrators, ensuring your database runs efficiently and smoothly.

Want to continue reading our 12d Synergy 4.2 series? Click here to read part 2 and learn everything you need to know about our new Image Gallery and Tile View.

Schedule a Demo of our 4.2 Features

Interested to see the features in 12d Synergy 4.2 live? You can schedule a free personalised demo with a 12d Synergy expert below.