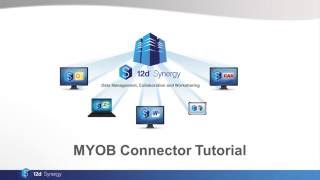 This video provides an overview of setting up the MYOB connector feature in 12d Synergy. This video includes how to connect 12d Synergy and MYOB, setting up the attribute mappings and how to run the connector. Data such as jobs, contacts, companies, tasks, documents and other information to be imported into 12d Synergy automatically as they are generated in MYOB. The connector API allows you to connect 12d Synergy to your business’s other software products. Connectors automatically import information stored in other products – preventing double entry, saving time and reducing errors.

MYOB (Mind Your Own Business) is an Australian based software developer that provides tax, accounting and other business services for small to medium enterprises.  MYOB’s range of features focus around invoicing, expenses, smart bills, payroll, collaboration as well as a range of analytical features that allow you to review all of your business accounting data.  You can read more about MYOB here.

Once you have connected MYOB to 12d Synergy via the API connector, you set up which information to sync from MYOB to the relative 12d Synergy Job or location.  The data which can be imported into 12d Synergy from MYOB consists of entities and fields.

Entities include information such as clients, jobs and contacts etc.  Fields include metadata such as name, created date, contact information such as email, phone number as well as any other custom fields.  This data can then be mapped for storing from MYOB to 12d Synergy.

Any changes to contacts or job information inside MYOB can then pushed through to 12d Synergy.  You can also choose which user in 12d Synergy the connector runs. This allows you to see which changes have been pushed from MYOB, improving your digital paper trail for QA.

A big timesaver with for customers is 12d Synergy’s ability to take information from MYOB and create a job from a template including folder structures, tasks, contacts, roles etc.  For example a job entered into MYOB could trigger a design job in 12d Synergy complete with everything you need to get started.  This cuts out all of the painful project administration involved when a new job comes into the business.